What an exciting time to be a part of Scentsy!  Want to join Scentsy, but afraid you’re not the Scentsy party type, or don’t know how to start a Scentsy business?  Don’t worry, there are so many ways to sell Scentsy, and that’s what I’m here for… I’ll help you!  The biggest asset for you to sell Scentsy is you! I will be your Scentsy sponsor, trainer, and mentor.  I will help you figure out how you can tailor your Scentsy home business to fit your personality, goals, and connections.  Feel free to contact me and I’ll answer any questions you have before you join, and be your Sponsor to help you be successful in your Scentsy Europe business.  Join my Scentsy team today so you can be in on the ground level as Scentsy expands to Scensty International.

Scentsy is expanding through Europe! What a great time to join this great company and be one of the first Scentsy Europe Consultants. As of April 18, 2011, Scentsy International opened, starting with Scentsy Europe in Germany and the UK, and just recently announced the addition of Ireland.  What an exciting time to be a Scentsy consultant.  Now is the perfect time to join Scentsy in time for global expansion with Scentsy.  This really is a unique opportunity that promises to be huge!  You have the chance to be one of the first and founding Consultants as Scentsy grows internationally.  Scentsy Europe will begin with Scentsy Germany and the United Kingdom (Scentsy England, Scentsy Wales, Scentsy Ireland, and Scentsy Scotland), but other countries won’t be far behind.  Check my Scentsy Europe page for updates as they are announced.  What an exciting time of explosive growth!  I’ll help you get started and train you so you’ll be able to get in on the ground level, and start off running. 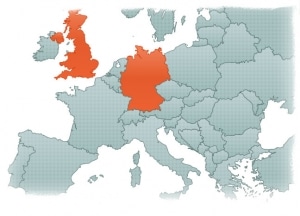 The Scentsy Welcome Meetings were held in these major cities, but all of the United Kingdom and Germany and now Ireland are officially open to buy and sell Scentsy now.  For the latest updates and further details regarding Scentsy’s expansion into the UK, Ireland and Germany, head on over to my Scentsy Europe page.  Read exciting news and the Top Four Tips to Start a Scentsy Business in Europe.  Enjoy!

The Scentsy Catalog is unique to each region, so there will be one for the UK and one for Germany, with the country-specific pricing and products offered, and are language-specific to each area as well.  If you’d like to see the catalogs, just let me know and I can email you a copy.  The Scentsy Starter Kit for Europe will be a bit different than the US as well, since the Scentsy products offered in those areas are unique.  The Scentsy Europe Starter Kit is an incredible value for the cost to sign up.  I’m so excited for you and can’t wait to help you get started in Europe!

What started as a way to pay off huge student loans and extras like Disneyland trips, turned into a way to pay for allll the life things with hubby and five kids. Becky loves to mentor her team to success, and has earned the prestigious Annual Mentor award 6 times. She has earned over 15 trips, coached hundreds, and spoken at Scentsy corporate events in Australia, Ireland, and the US. When you join Becky's team, you get to learn from the best! Even with her success, she loves to share her own experiences to help everyone connect on a real level and find their own unique success. Come join us and find your tribe! * The government requires that I advise you that, although the opportunity is wide open for anyone to do this, not everyone will, as is shown in the Scentsy Income Disclosure Statement. But, I'll do my best to support you to success.