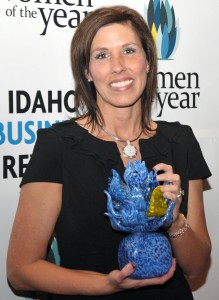 "As more than 500 attendees — and 50 Idaho Business Review Women of the Year — held their collective breath, the envelope-opening moment finally arrived. Heidi Thompson was reveled as IBR Woman of the Year and accepted her award to thunderous applause and a standing ovation. Here, Thompson holds her one-of-a-kind award created by glass artist Zion Warne. (Photo by Jory Clay Sutton)'

First-ever Idaho Woman of the Year Award given to Heidi Thompson, Scentsy President and co-owner, on Feb. 17, 2011.  Traditionally, this award has been given to a group of 50 women collectively, but Heidi's score was the highest across the board in all categories, so they decided to break tradition and give her the top award.  Heidi was named the 2011 Idaho Woman of the Year - the first time that honor has ever been given!  She is such an amazing woman and we are lucky to have her with us at Scentsy.

“This is our sixth year for the Women of the Year event and it was our best ever,” said IBR Vice President and Publisher Sean Evans. “We truly enjoyed celebrating the success and triumphs of some of our state’s most successful women.”  A first this year came at the end of the evening in an Academy Award-like moment as Thompson, president and co-owner of Scentsy, Inc. - and one of the 50 honorees - was revealed as the 2011 Woman of the Year. A selection committee of past honorees used a rating system covering four critical categories, and Thompson scored highest across the board.

Thompson, whose rags-to-riches story could be fodder for a Hollywood movie script, smiled through tears as she accepted the award presented to her...  She thanked her mother Alice Kalilimoku, her children, Sarah, Mary, Emma, Owen and Grace and especially her husband, and “best friend,” Orville. Other family members, friends and coworkers were there to share the celebration... “Every one of these 50 Women of the Year exemplifies what it takes to be a leader, deeply involved in her community, an accomplished professional who can and does follow through on long-term goals,” Evans said.

Scentsy on the TODAY Show

Scentsy's President Heidi Thompson appeared briefly on the TODAY show with Kathie Lee and Houda on Dec. 8, 2010 to elaborate on Scentsy's generous donation of $2.5 million worth of Scentsy Buddies (100,000 Scentsy Buddies!!!) for their Toy Drive campaign. Scentsy Buddies are fun new stuffed animals with a small pouch where you can place a small pouch of scented beads so that your Scentsy Buddy is not only snuggly but smells good as well! Each brand new Scentsy Buddy comes with a free Scentsy Scent Pack of your choice and the selection of Scentsy scents available in Scent Packs continues to grow with each catalog so you are sure to find you favorite Scentsy scent!

Scentsy Buddies are a great gift for little kids who love to have a fun cuddly toy as well as the scent can be something relaxing and soothing to help them sleep at night when it's time to catch some shut-eye. All of our children love the Scentsy Buddies and some of them even have more than one! What a generous company and a wonderful gift for the kids' Christmas presents - every child needs a Scentsy Buddy!  The Scentsy Buddies have been so popular, now many more kids will be able to have their own, thanks to Scentsy's spirit of giving!  So proud to be a part of such a great company. 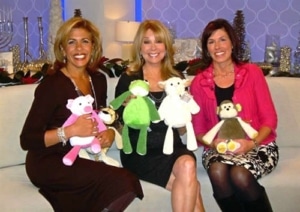 Since this generous donation of Scentsy Buddies shortly after their introduction, Scentsy has gone on to expand the Scentsy Buddy line and continues to introduce fun, new Scentsy Buddies. Most of the stuffed friends have been animals but they have done a robot and some other stuffed toys that aren't animals. Each stuffed toy Scentsy Buddy is a high quality stuffed toy and all share some of the same signature Buddy elements like the Scentsy embroidery on the foot, the pouch for the Scent Pack, and the same super soft fabric!

Today, there are also limited-time Scentsy Buddies but to browse and shop Scentsy Buddy simply follow the link and have fun!